Eric Joins the Conversation as A.R.E. takes on ROI in Retail Environments 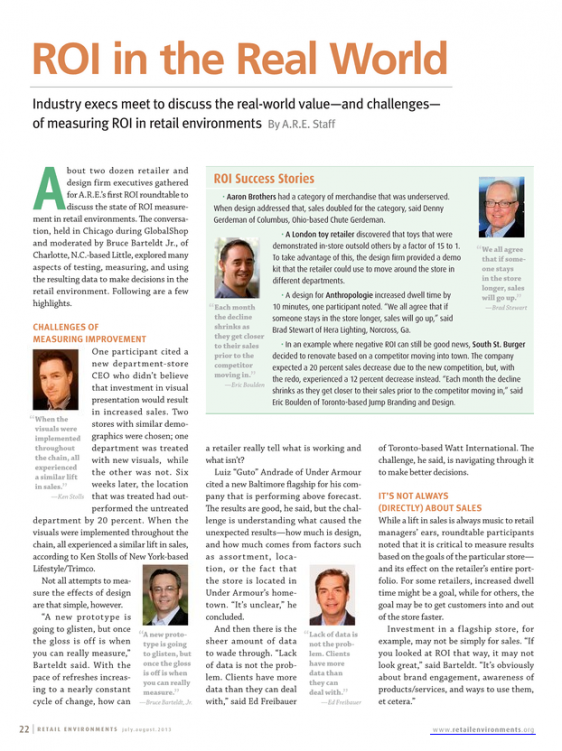 Eric inside the July/August edition of Retail Environments Magazine

Back in April Jump’s Eric Boulden was invited to participate in A.R.E.’s first ever Return on Investment (ROI) Roundtable during GlobalShop 2013 in Chicago.  The discussion centered on the state of ROI measurement today and the real world challenges facing this within retail environments.  Alongside other industry execs, Eric joined in the conversation that explored numerous aspects of testing, measuring and using resulting data to make decisions in the design of retail spaces.  Highlights of this were published in the July/August edition of Retail Environments Magazine.

A central theme of the conversation was the growing incorporation of sustainable design elements and their related long and short-term costs and benefits.  Accessibility for green products is greater than ever today with 89% of suppliers surveyed by A.R.E. currently offering sustainable products or services.  In terms of what’s driving green decisions, retailer’s rate initial costs, ROI, availability and vendor quality at the top of their lists.  As Eric noted, “materials and operations choices with a definable ROI have a better chance of continuation in the design program.  Equipment and lighting are easier to prove out than finishes”.  Accordingly 85% of retailers said they’d be willing to pay more for a green building product if it paid for itself within 3 years.  The panel agreed with this statement, with the overwhelming majority stating their retail clients not only look for green strategies to pay for themselves, but to do so quickly.

While a lift in sales is always welcome, roundtable participants noted that it’s critical to measure results based on the goals of the particular store, along with its effect on the retailer’s entire portfolio.  As discussed, certain LEED Certified and flagship locations act as ‘influencer stores’ rather than simply a sales transaction space.  Retailers responsible for these design showcases may have hundreds of stores that benefit from the branding of this space.

Eric noted the importance of the big picture viewpoint when it comes to ROI.  Our client South St. Burger decided to renovate a location based on a competitor moving in.  While South St. expected a 20% sales decrease due to the new competition at this location, with the redo experienced only a 12% dip.  In this case, negative ROI can still be good news.  “Each month the decline shrinks as they [South St.] get closer to their sales prior to the competitor moving in”, Eric explained.

The main takeaways from the conversation circled back to the idea that retailers need to evaluate exactly what it is they are looking to accomplish with the design in order to better determine the ROI of the space later on.  For the full article, check out Retail Environments online.